Electricity is an industry of the future

Felix Gunnarsson and Karl Jansson went straight from upper secondary school to working as electricians at Holtab. During their time at the company, they have learned more and more with the help of experienced colleagues.

“If you make it clear that you can and want to learn something new, you’re given the opportunities to grow at Holtab,” says Karl Jansson.

“Especially after you’ve settled in and can take on a bit more responsibility,” says Felix Gunnarsson.

DID NOT KNOW WHAT KIND OF CAREER THEY WANTED

When Felix and Karl attended upper secondary school, they had no idea what kind of career they wanted. They say they weren’t very technically minded. Today they’re both working as leading fitters. Felix is heading towards a new role in sales support.

He studied a combination of electricity and IT in upper secondary school.

”My brother was hired as an electrician at Holtab, and I did an internship with him – that’s how I became interested in Holtab. Then I got a summer job.”

”I studied electricity and energy, focusing on energy, so electricity wasn’t even my major. Nor did I know what kind of career I wanted and I didn’t know much. I just thought it was fun to tinker with electrical items and hopefully make them work.” 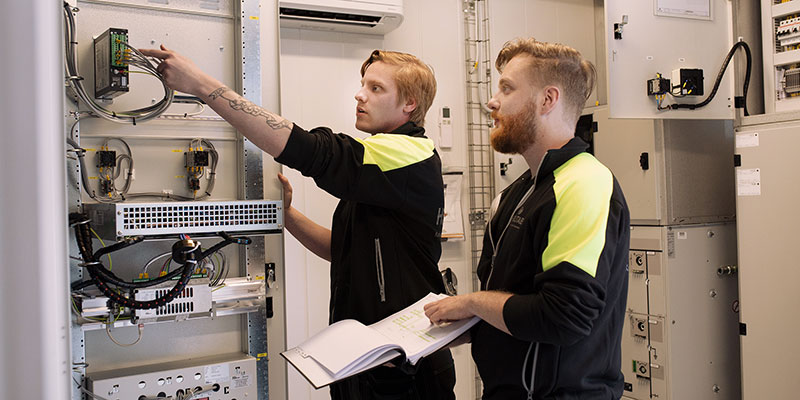 You learn to be an electrician from working with more experienced colleagues. When you’re good and a fast learner, you can take on increasingly difficult products over time. Changing departments is also a great way to learn more.

”After learning about the products, the next step is to test them before they go out to the customers. Later, you learn more about how they function and how the things you assemble work. Another step is leading fitter. That’s when you’re responsible for the workflow in a large project,” says Karl. 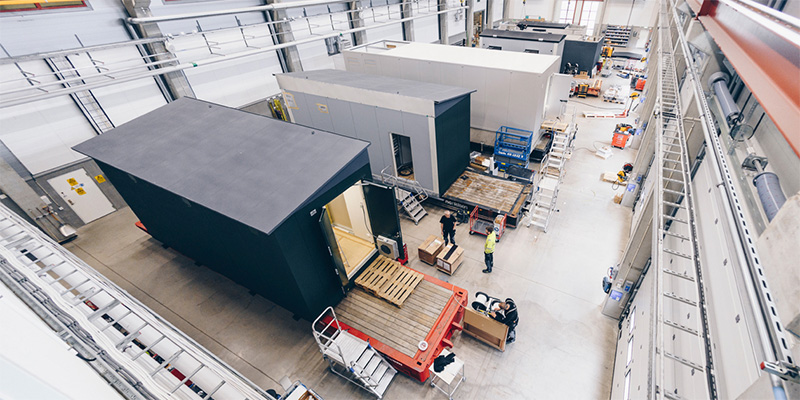 The products are designed, assembled and tested at Holtab’s factory in Tingsryd, before being delivered to customers.

Neither Felix nor Karl are working towards any particular dream position, they’re just taking it one step at a time instead.

“Its about seeing where you may end up. Once you are comfortable in your role, you can keep an eye on internal job ads and take the next step. Holtab is keen to retain competent staff,” they say.

Why do you think training as an electrician is worth investing in?

”It’s an industry for the future, of course. Automation is growing at extremely high rates in all fields. It will require more and more skills,” says Karl.

”It’s an exciting field, in which many new products are being developed. For example, we tested products in Norway a few years ago. Today, we manufacture and supply them ourselves,” says Felix.

Name: Felix Gunnarsson
Professional Role: Leading electrical fitter, on the way to a new job in sales support at Holtab
Lives: Karlshamn
Before Holtab: Upper secondary school education with a specialisation in IT and electricity.
Leisure: Spends a lot of time with his partner’s horses and plays computer games.

This article is part of the #WorkingAtHoltab series – read more articles here.

Merry Christmas and a Happy New Year!
With best wishes from Holtab. →

To become an electrician, Jalil Faqiri studied at Montico Adult Education in Växjö, for a year and a half. He then started looking for an internship, found Holtab, and stayed. On 12 January 2021, he was given a permanent position as a electrical fitter. Congratulations!→

Michael is passionate about development and leadership

#WorkingAtHoltab: Michael Fohlin enjoys being a manager. It allows him to support and engage his employees - the essence of the Holtab spirit.→

The desire to develop is apparent at Holtab

At Holtab, there is a spirit of being open to trying new ways of doing things. This raised HR Manager Pernilla Sundén’s eyebrows. “It’s unique,” she says.→

Electric vehicles get power from Carl-Fredrik

#WorkingAtHoltab: Carl-Fredrik Gyllenhammar wanted to work more with the products. In his opinion, the combination of sales, technology and finance is the best thing about being a sales engineer at Holtab.→

Annica Arneving’s mission is to get the job done while using less energy.
“It has a positive impact on the company’s results, but it also makes things easier for the individual,” says Annica, new Procurement and Logistics Manager at Holtab. →

“Holtab’s engagement in CSR surprised me”

#WorkingAtHoltab. Linus Olofsson manages the growing Business Support department at Holtab. The department’s role is to receive potential jobs from the sales team, and convert them into feasible tenders. This all has to be presented in a way that the customer can understand and base a decision on. →

"I thought industrial jobs were for guys"

Hale Ståhl started as a theatre nurse, but switched to the electricity industry. She has no regrets. On the contrary. She has good working hours, learns something new every day, and laughs a lot with her colleagues at Holtab – who are almost all men.→

Holtab is growing in Denmark thanks to renewable energy

A good start for Holtab’s servicing and installation efforts

Holtab’s efforts to help more customers with installation and servicing are being met with great interest.
– We are fast-paced and accessible company, says Björn Karlsson, CEO of Holtab Service.→

Mika Nieminen is our new sales engineer at Holtab in Finland – a former professional cyclist who, with a wide network of contacts, solid knowledge of the industry and a great head for winning, will bring both drive and expertise to his new workplace.→